I see that you’re here to learn a little more about me, so today I’m going to share everything I know of myself with you. Weird saying that, but you get the point!

Ok, so where do I start?

I was born and raised in the UK, London to be precise with 2 siblings that I spent a majority of my childhood growing up with. My sister was the mother figure in my life as my mother, unfortunately, passed away when I was just 4 years old.

Don’t get all soppy!

Sure it’s sad, but its something I’ve had to deal with and my sister filled in all the blanks of a mother that were missing.

I then grew up with my best friend (Andre), where I went to school and kind of messed around for the most part.

Shortly after school, I decided to embark on a journey to become a mechanic, as my dad worked for Ford (15 years) as a supervisor, and I loved anything with an engine and petrol.

Touching on that, I used to repair motorbikes from as young as 12 years old, and the funny part is that I was never taught. I just broke things and put it back together that eventually led to me being very mechanical minded as I grew up.

back to the point though! I decided to study engineering in college and did so for around 4 years. Not long after I came out with a BTEC National Diploma in motorsport engineering (F1 stuff), but that quickly went down the drain as I never pursued it.

Just like every other entrepreneur story, I was lost and didn’t know what direction to go in.

So me being me and growing up in the ghetto kind of areas of London with NO Dad and no Mum. Well, it only went south from there!

And thats not to say that my sister did do a great job as she did, which is why I’m straight and narrow now. But, growing up in the area led me to make stupid decisions and having a delusional outlook on life.

Anyway, it wasn’t long after when my sister decided to sell up and move abroad, which then left me looking for a place to live.

I moved in with a good friend of mine(till now) Glenn. Where the house was essentially a bachelors pad for the most part as it would be party and fun.

After I got that all out of my system and been arrested over 10 times for things I don’t wish to discuss here. I then decided to get a job where I was given a chance to work at Ford as an aftersales customer service guy.

That job was cool, and I had done jobs in the past, like call centers and stocking shelves from time to time. But this was the first place that was kind of suited and booted and had the potential to be somebody that I was apart of.

It wasn’t long before I was sacked after just 6 months, for reasons I still don’t know. I had a good friend and manager Chris that I super got along with, but on this day I was his worst enemy.

I kind of understand as its a hard decision to make. But I still don’t get why the fired me. I mean, then the only thing I ever did was use the free lunch vouchers when I shouldn’t have from time to time, and I did turn up late like 3 times.

But it was my first proper job, give me some slack! I was only 21 years old.

Anyway, after that happened I was down and out for around 6 months straight. no money and no job.

So I went back to crime where I was selling drugs and a whole bunch of other stuff to get my life back up.

And it worked for the majority of it. I made good money, bought a car again and had money in the (well not bank) but you know, my shoebox!

And then I applied for another job to become a security guard of film sets as I knew a lady that ran the whole firm. Anyway, as she knew my mum and stuff she simply gave me the job with little to no effort.

I worked there for like 6 months when I was making like £3k per month legit, and then I applied for another job to the London transport service.

Not long after, I was asked to go in for an interview to TFL and what do you know, I was given the job and started there on customer service with a job that paid me £2k per month legit!

The reason I took the pay cut was the fact that I was self-employed on the other job and it was on a contract basis. I didn’t have a guarantee it would pay me long term and the hours were absolutely ridiculous.

And, I knew that TFL had bigger opportunities in regards to becoming a train driver and other roles that were super secure too.

Anyway, it wasn’t even 2 years before I became a train driver for the underground.

During those 2 years though, I met a guy that I won’t name here that changed my life. It was a friend’s dad and he was pretty well off in life. But I never knew how he did it.

Turns out that it was stock market trading and the guy retired at just 34 years old. Anyway, when I got to know him more, he would tell me about everything wrong with the government and how the banks are not safe blah blah blah.

I was sucking it all in and really keen to learn from him as I’ve always been a person that wants to better my life.

Anyway, it wasn’t long before rehearsed me if I want to learn what he does. And of course, I was so happy and responded with YES teach me, teach me.

So he did! every week he taught me a few hours on trading stocks. And I gave it a go for like a year and couldn’t ever crack it.

So I gave up on that but then when I got the job in TFL, my sister decided to come back to the UK as my nephew (her 10-year-old son at the time) didn’t want to stay in the Caribbean (which we all told her would happen, cough cough).

Anyway, I felt like things were going to work out again and because my sister wanted to start a business abroad and never did. And we both had some cash behind us. We ten decided to open a small restaurant.

that lasted for about a year before me and my sister biting each other heads off. She was 44 and I was like 23 at the time.

That didn’t work out but I wanted to continue to make something for myself. Thats when I went back online and started watching how to make money vids. That then led me to find a low barrier to entry business as I wasted like 10k in the shop.

So I stumbled on affiliate marketing, and Tai Lopez lol. He was popping back then and although I don’t think he’s any good at teaching business he surely did teach me how to change my mindset.

That then led to me buying course after course on affiliate marketing and reading a ton. Like over 100 books on self-development and business.

I didn’t make any money for the first year really but I did sell logos on Fiverr that I learned from youtube videos. And I ran people’s Instagram pages, as I used to bot them.

Anyway, that brings me to today the 21st of Jan 2020. I have a son with my Mrs. Sadie to be and (fashion YouTuber) and I ran an affiliate marketing business that makes over £2000 per month consistently.

After spending over £5k on courses, I finally found a course that worked which was Franklin Hatchetts Savage affiliates. And that was the course that changed everything.

Now I’m continuing my journey and the next goal is 10k per month. I’m giving myself till the end of this year and I think it can happen with the right work ethic.

And thats about it really! I know its a bit of a crap ending but this journey is still in the process. So I’ll probably tune back in here sometime in the future and update everything. That way you can see if I hit the target and get to know a little more about who I become too.

I hope you enjoyed the spiel of Leon Angus and I look forward to catching up with you somewhere in the field of business.

If you want to see more then watch my full video on my life story here! 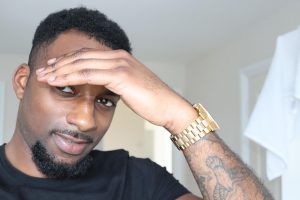 I’m Leon, a 28-year-old part-time train driver, and affiliate marketer. I created this site to share my progress, failures and essentially the whole story of me going from nothing to something.

Welcome to my little corner of the internet. Stick around to see what I have in store.

Read more about me here.